At about mile marker 101 on the scenic Highway 61, you won’t even notice you’re driving buy Butterwort Cliffs. This Scenic and Natural Area (SNA), located within Cascade River State Park, is home to a number of birds and rare plants.

As you’re driving on the road, look for a brown, wooden park sign marking Butterwort Cliffs. From the water, you’ll notice the beautiful bassalt cliffs of tiny Ergo Bay plunging into Lake Superior, and birds everywhere.

Little Ergo Bay and the Butterwort cliffs are the nesting spot for a colony of Herring Gulls and Peregrine Falcons. Dozens can be seen flying around the bay and perched on all levels of the basalt cliff rocks. Bald Eagles have been known to nest here as well.

Butterwort Cliffs SNA is actually a designated sanctuary for these birds. Therefore the area is closed from April 1 – July 15. 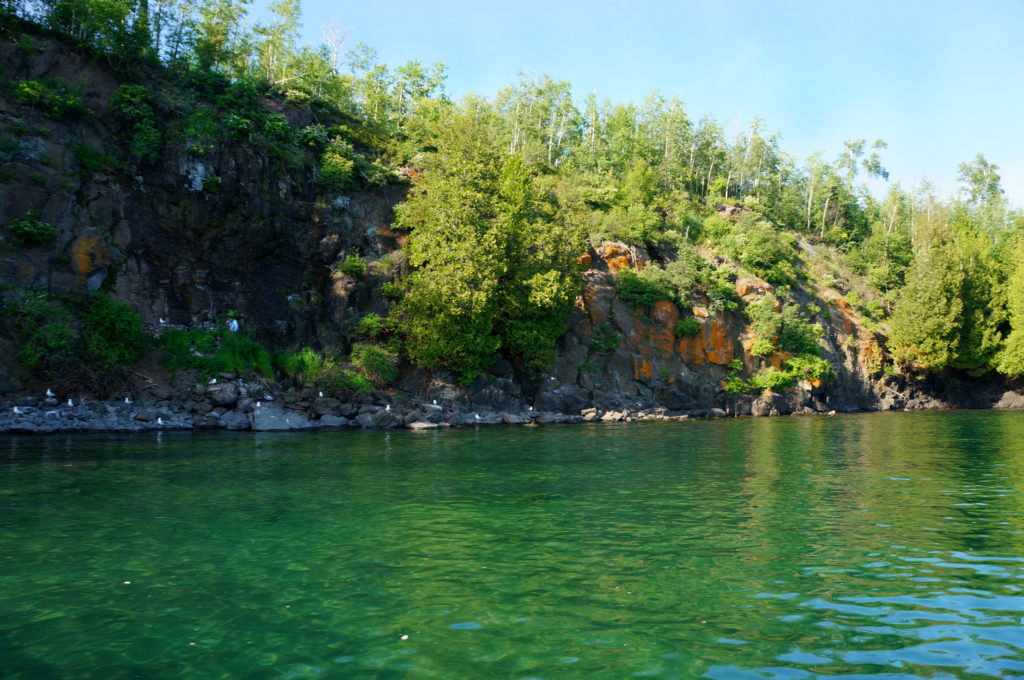 Rare arctic-alpine plants also find a habitat among the cliffs because of the lake’s cool, moist microclimate.

Alpine butterwort (the area’s namesake) is a carnivorous flowering plant that is endangered in Wisconsin and of “special concern” in Minnesota due to its dwindling habitat. Carnivorous because it traps small bugs that crawl across it’s sticky ground-hugging leaves. The bugs get stuck and the plant digests them with special enzymes.

Another rare find at Butterwort is the Hudson Bay Eyebright, a relic from the last ice age. In Minnesota it only grows along the shores and islands of Lake Superior, and is also of “special concern.” As co-authors Chel Anderson and Adelheid Fischer write in their book, North Shore: A Natural History of Minnesota’s Superior Coast, these plants are “holdovers from glacial times, which became separated in some cases by more than six hundred miles from their main ranges in the Arctic tundra or in the cordilleran, or mountainous, regions of western North America.

There are no designated trails around Butterwort Cliffs. Exploring here on your own is not recommended. Cascade River State Park occasionally has interpretive walks through the Butterwort Cliffs SNA. The area is closed from April 1 – July 15 due to bird sanctuary. It’s just fun to know it’s there!