Caribou Cream is Shakin’ Up the Sugarshack

Caribou Cream Maple Syrup’s award-winning maple syrup gives a new meaning to the phrase, “go with the flow.” The maple sap only flows once a year. So when sap from over 3,700 maple trees starts flowing into Caribou Cream’s Sugar Shack in Lutsen, MN, they’ve got to get it while it’s going! And during peak season (usually early – mid April), it flows about 1-2000 gallons per day.

Here’s how they turn it into one of the North Shore’s hottest, and most delicious commodities. 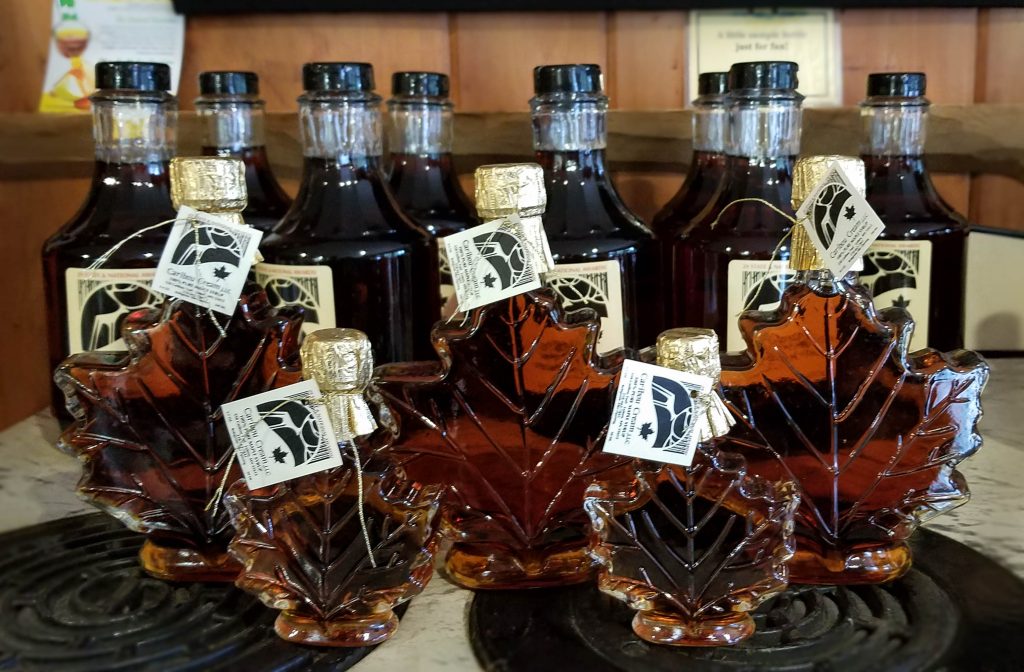 Caribou Cream Maple Syrup for sale at the Sugar Shack

Cookin’ Up Sap in the Sugarshack

Caribou Cream’s award-winning maple syrup is made with love inside a one-room cabin on Minnesota’s North Shore of Lake Superior. It’s called the Sugarshack (mostly because of the sugar that’s being processed, and partly because of the love). And there was some hot and steamy love going on in there today! Well, they were cooking sap, which made it really hot and steamy inside.

Seriously though, it was hot and steamy. That’s because Caribou Cream Maple Syrup is cooked by using an evaporation process. The evaporator is a piece of equipment that is wood-fired and boils the sap inside of a stainless steel container. As the sap boils, water is extracted from the sap by the evaporation process. The remaining liquid is concentrated sap, otherwise known as syrup!

Sugarmaker Renee shows us in this video. 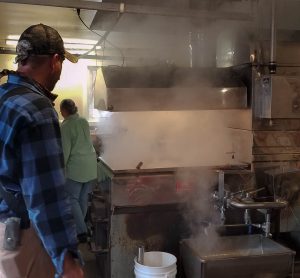 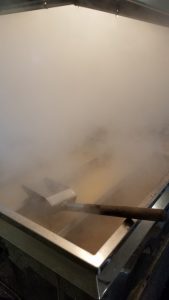 From the Sugarbush to the Sugarshack

Caribou Cream’s 3,700 maple taps stretch across 65 acres of sugarbush (maple rich forest) in Lutsen, Minnesota on Lake Superior’s North Shore. A system of hoses tangles up the forest, sending the harvested liquid into collection containers back at the Sugar Shack. A vacuum system is used so the liquid doesn’t have to rely on gravity to get it to its destination.

Watch the maple sap flowing down the line in the video below.

Behind the Sugarshack is where all the sap is collected and put through the first phase of processing. As he vigorously works to keep up with the relentless flow of sap streaming in, Herb Willis, owner of Caribou Cram (Herbie as he’s affectionally called) hands me a sample of the liquid. “Take a sip,” he says. “It’s the absolute best, cleanest water you can have – naturally filtered right through the tree!”  Raw sap at it’s finest! It was delicious – cold water with just a hint of sugar.

Over the sound of the equipment, Herbie explained that the raw sap is going through reverse osmosis. This first phase of processing extracts about two-thirds of the water out of the raw sap, which reduces the cooking time immensely. In the video below Herbie is using a hydrometer to measure the density of the liquid, which will reveal the sugar content.

When the reverse osmosis process extracts water from the sap, the result is the cleanest, most useful wastewater you can have! It actually makes distilled water. Herbie has several enormous holding tanks for the distilled water, and none of it goes to waste. It is used to clean all of the equipment on a regular basis, it is so pure you don’t have to use any other cleaning agents. 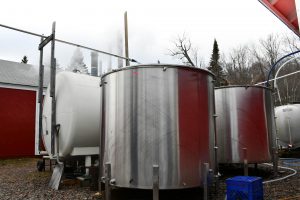 Holding tanks for the distilled water extracted from the raw sap

After the sap comes in from the trees and goes through reverse osmosis, it flows inside the Sugarshack to the evaporator (which we already talked about). But we’re not done yet! The maple syrup that pours out of the evaporator is pumped over to the finishing rig. 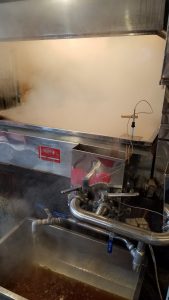 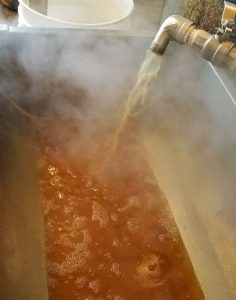 Maple syrup flowing out of the finishing pan 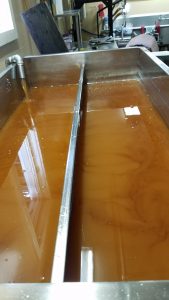 An organic filtering agent, diatomaceous earth, is added to the syrup to help it pass through the Finishing Press. This is the only ingredient added to this 100% pure natural syrup. Next, the liquid is pumped through the Finishing Press to filter it, and out comes the very maple syrup that you will put on your pancakes! Then it’s pumped into drums until it’s ready for bottling. (If you watched Renee in the video above, you already knew this :)).

Here is a video of Renee and Henry working over the steamy sap and feeding the fire. The fire gets fed birch and maple logs every 7-10 minutes on a timer. Sugar maker Henry said that it’s probably 1,200 degrees right over the fire where the sap is cooking! The noise you hear in the background is the Filter Press and pump for the finished syrup. Watching them work, you can see a slow, steady rhythm as they work in tandem with their tasks. You can’t miss a beat

It takes about 35-40 gallons of sap to make one gallon of maple syrup. At the end of a good season, Herb and his crew might end up with about 1,000 gallons to put on their pancakes. Actually, they bottle and sell it right out of the Sugarshack in Lutsen. It’s just a small unassuming place two miles up the Caribou Trail. But many find their way there to take home this sought-after North Shore commodity. And Caribou Cream only wholesales to a few choice merchants on the North Shore, so it’s truly a North Shore exclusive.

And for even more North Shore deliciousness, many local restaurants use it in some of their recipes. A local favorite beverage is a hard cider by North Shore Winery called Herbie’s Blend Cider. It features…you guessed it, Herbie’s Caribou Cream maple syrup! The winery is located about three miles from Caribou Cream, but the cider is on tap at many other bars and restaurants. You’ve got to try it! 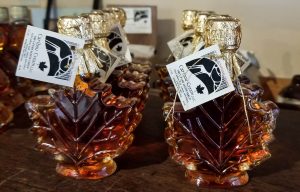 bottles of maple syrup for sale inside the Sugar Shack

For sale inside Caribou Cream

Winner of Over 30 Awards

Caribou Cream has more awards than any other Minnesota syrup producer. In fact, the Minnesota State Fair has asked them not to compete every year to give someone a chance! Among the dozens of awards displayed inside the Sugarshack, there are four coveted Minnesota Maple Syrup Association Grand Champion trophies (from the MN State Fair), and two distinguished 2nd Place awards from competitions in Vermont. They are proud of them all, especially the awards from Vermont since Vermont is known for having some of the best maple syrup in the world. 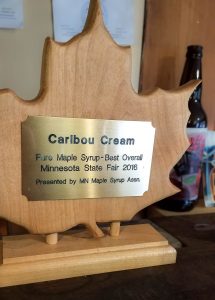 Award from the Minnesota State Fair 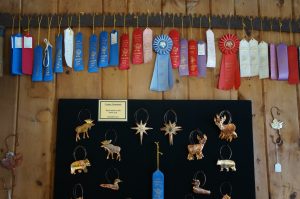 Some of the awards displayed inside the Sugar Shack

Come and Get Some

Caribou Cream is usually always open so when you’re in the neighborhood you can stop in. If you have cash you can buy a bottle on-your-honor. Pick up maple syrup gifts and treats, and a couple of jugs for yourself. See the evaporator. Admire the local items for sale, cute decorations, and all of the syrup bottles in the gift area.

From mile marker 92.2. on Highway 61 (about a mile east of downtown Lutsen), turn on the Caribou Trail (Cook County 4). Travel about 2 miles up and Caribou Cream will be on the right. Look for the small sign.

Caribou Cream sign on the Caribou Trail in Lutsen

Places to Stay in Lutsen

Looking for more things to do in Lutsen?

5 thoughts on “How to Make Caribou Cream Maple Syrup”