Roadside Art With a Message in Hovland, MN

Making a Statement With Roadside Art on the North Shore MN

On a remote stretch of Highway 61 near Hovland, MN there is a cabin with an enormous roadside art display. This is one of those places that you drive by, slow down, and say, “What the heck is that?” 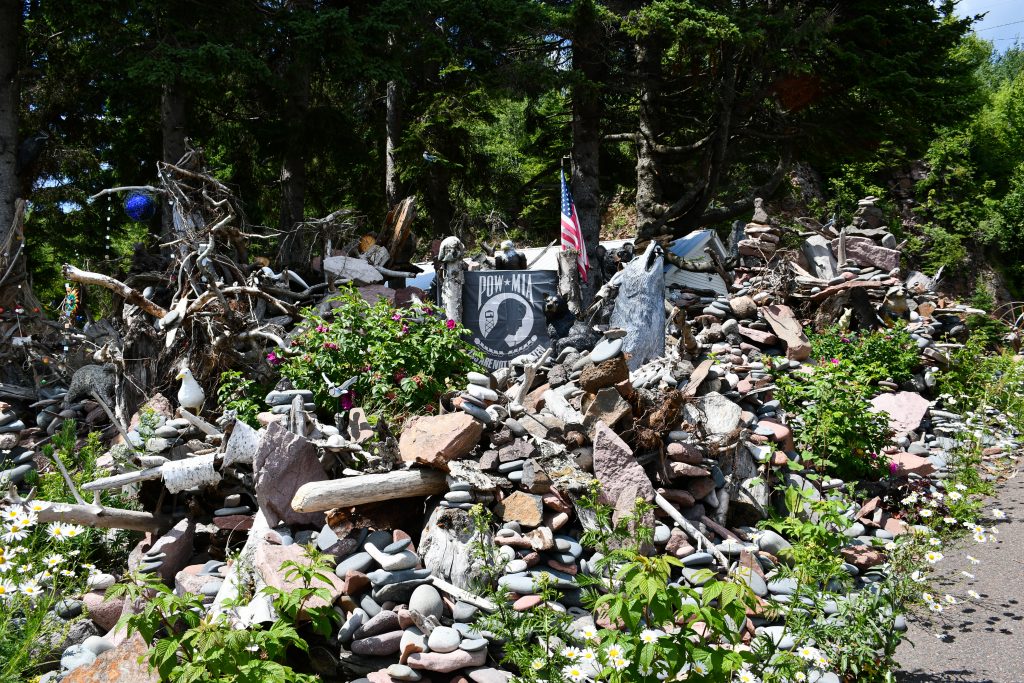 Rock and driftwood yard art with a message

Some people love it, others hate it, but everyone wonders what it is. And why? Rumors include  “the guy retired and went crazy” or “just another eccentric artist on the North Shore.” This article will settle the rumors and answer the dying question of why it was made (and continues to grow).

Until now, this North Shore MN roadside art display didn’t have a name. Today, NorthShoreExplorerMN.com is naming it: Harmony on 61. Read on.

The lovers and the haters

The display is found between mile marker 118 and 119 on Hwy 61, and it stretches several hundred feet across the property. At first glance, it looks like a giant mound of rock and driftwood (which it is, to an extent). 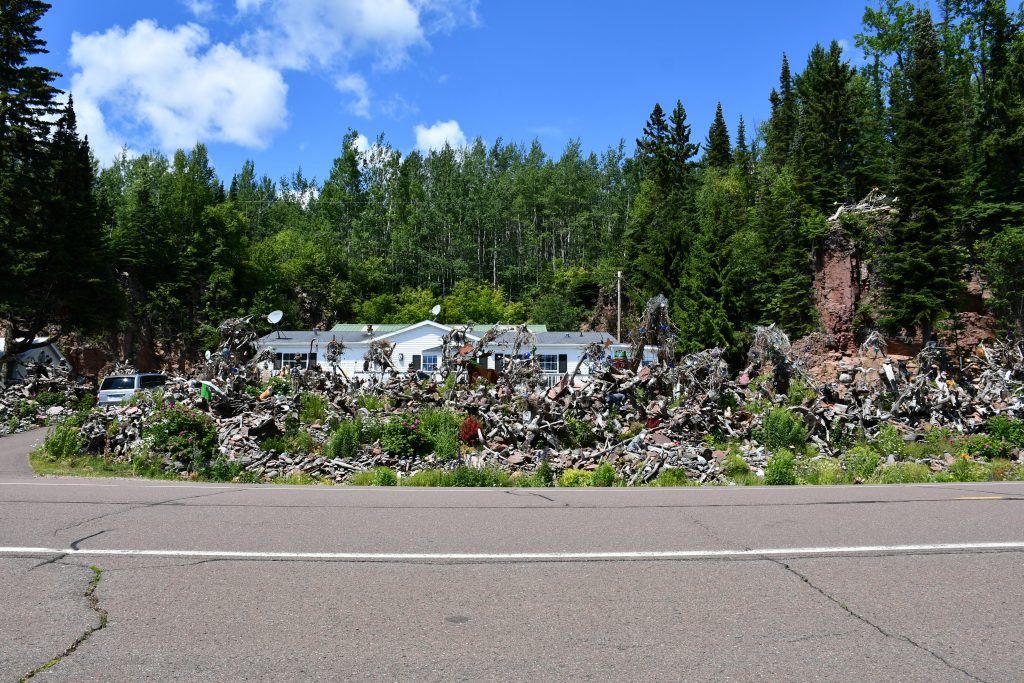 Look closer and you’ll find all manner of woodland creatures, mannequin heads, shiny things, and all sorts of weirdness. It’s enormous! The display has grown over the years, since about 2011. It has definitely gotten more bizarro over time!

If you were ok with the towering driftwood sculptures topped with vines, and the cacophony of birdhouses, smiling creatures, garden globes, dangling CDs on strings, and other shiny things intertwined in the rock and driftwood, maybe the mannequin heads pushed you over the edge? Or maybe it draws you in even more and gives you an appreciation for this labor of love? What is this guy thinking? 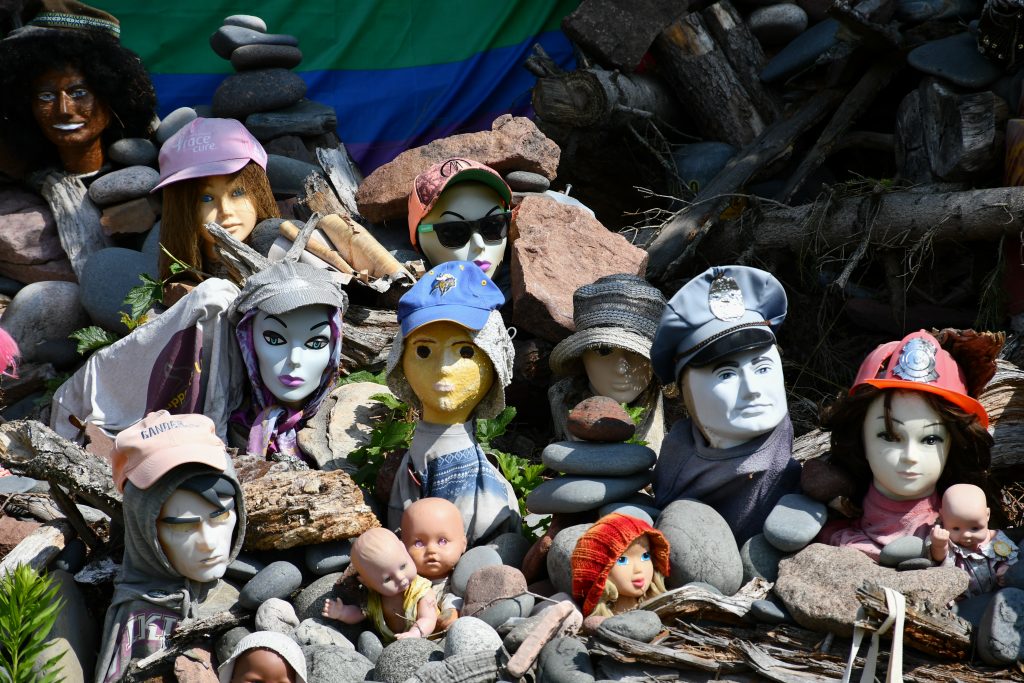 Whenever this roadside display is brought up in North Shore Facebook Groups, the comments reveal quite the controversy between the lovers and the haters. Some think it’s an eyesore made of trash, and the work of a deranged person. Others enjoy the creativity, the hidden treasures, and the bigger message.

I had to get the story about this thing, so one day in I knocked on the door. A very nice man, looking 60-ish (and not deranged), came to the door. Chuck was his name and he took me on a tour!

The creator amidst his work.

Chuck is from Maplewood and this is his Up North cabin. The property’s landscape is made up of rhyolite, which is a type of lava rock abundant around Lake Superior. In fact, Chuck’s front yard is Lake Superior, and his backyard is a tall rhyolite cliff.

This rock doesn’t hold soil or vegetation very well, and over time (especially during the big storms in 2011 and 2012) some problematic erosion occurred. Something had to be done!

He tried enhancing the land with materials such as sod and soil, but it kept washing away. So he decided to build a protective berm in front of his house with the readily available driftwood and rock.

He would fill in the problem areas, stand back to look, then add a little more here and there. 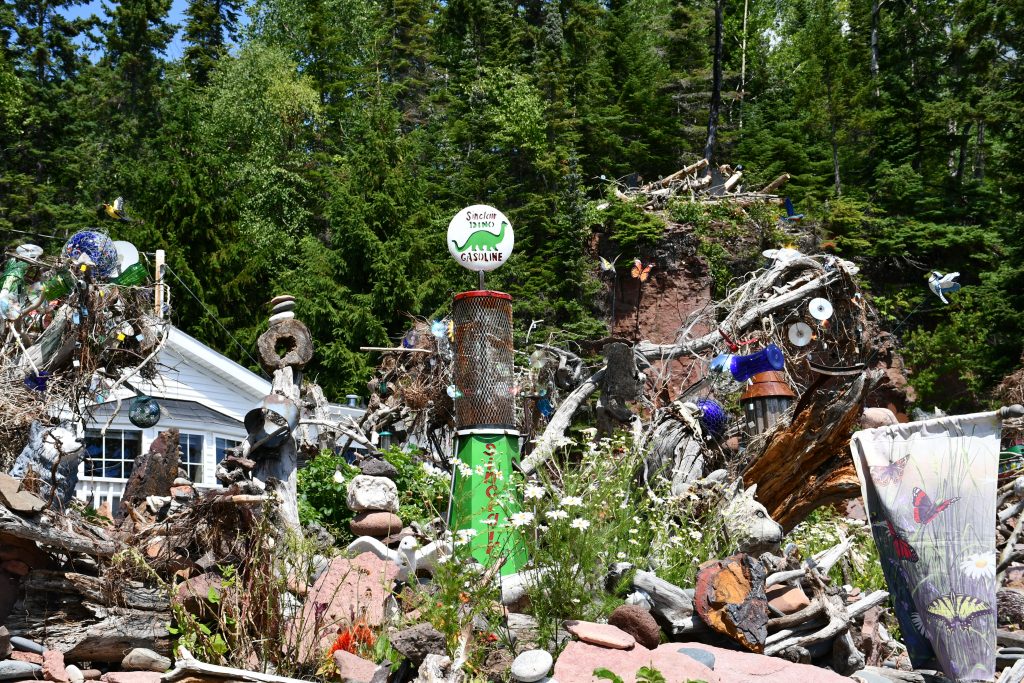 As he continued to build, he became more intentional with the placement of materials so they would look interesting. Eventually, he added all kinds of new elements, statement pieces, and cool random things that inspire joy.

He has made significant investments in some of the larger items, as well as plants, flowers, and yards and yards of soil and rock.

Among the driftwood, rock, and cool random things are statues of friendly critters like smiling fox, squirrels, wolf, lynx, eagles, birds, and deer. There are hundreds of them living and hiding in the rubble. Big ones and small ones; you have to look close to see most of them! 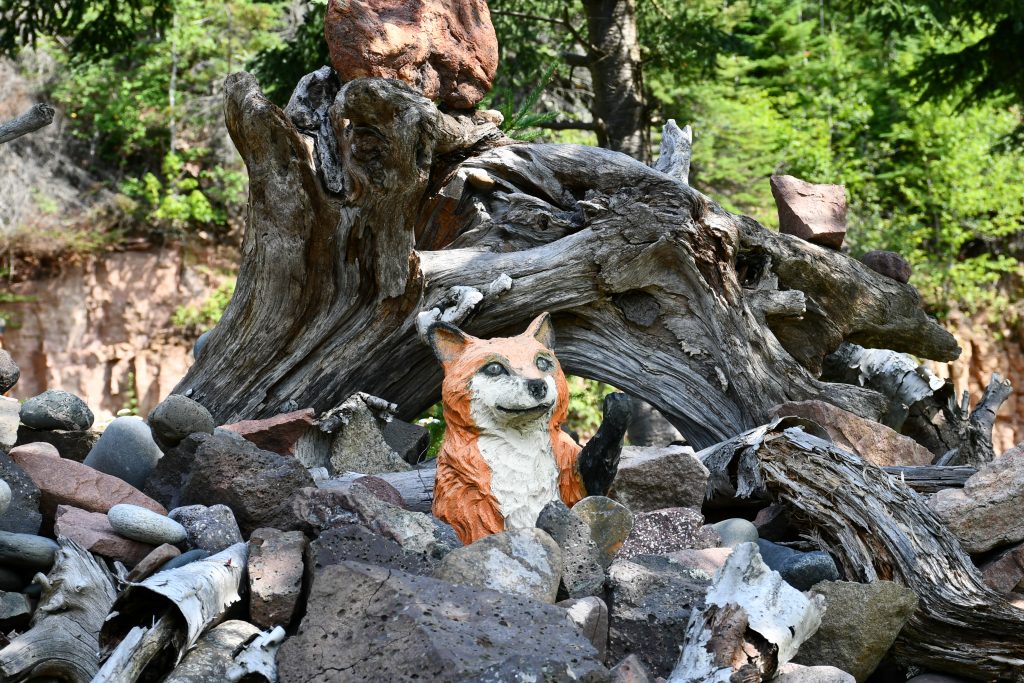 These happy little creatures were placed here to pay homage to the local inhabitants. A nature lover, Chuck told me stories about the local otters that skirt the shoreline, the eagles that perch on the trees above the cliff, and the fox that lives in a den nearby (they are famous by the way, having been visited by big-time nature photographers).

He quietly pays attention and has a great appreciation for the natural world, which is reflected in his creation.

There’s a lot going on here, and that’s part of the fun! You have to zoom in to get a full appreciation for all the little things hidden in the cracks. It’s a treasure hunt to see what you can find – a tin man, mini tugboat, a pair of fishing frogs, a smiling squirrel, or Wilson from the movie Castaway. 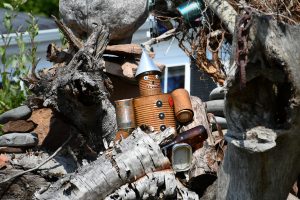 Zoom out and you’ll notice some of the larger pieces like an old-time Sinclair gas pump, statement signage with messages like Pax Vobiscum (peace to you), and the piece de resistance – a custom made metal moose that sits in front of the house where the project began. See a picture of the moose posing with the artist above.

A lot of the smaller items were found at garage sales and shops, while others were gifted by friends and strangers. Chuck especially loves the things his grandchildren have added.

The inspiration is in the details

The haters say it’s an eyesore. But if you look close and open your heart and mind, you will find the message of harmony, peace, and joy.  Here’s where the mannequin heads come in.

They are all different, some of them creepy-looking, and they’re all living happily together in the same place. To put them all together along with the smiling woodland creatures, unique sculptures, and the banners promoting peace and unity, it sends a message of welcome and inclusion for all passing by.

Many of the seemingly random objects are part of the message of harmony, peace, and joy. Flowers and plants to add life and beauty. The shiny things like CD’s hanging from strings, and garden globes perched upon towers of driftwood, are there to reflect the sun’s natural light and bring brightness into the world. The heart and dove sculptures bring peace and love. The smiling critters are guaranteed to make you smile and bring a little joy to your day.

How else does this artist inspire change?

While Chuck is not working on creating harmony, peace, and joy on the North Shore MN, he works for change in the Minnesota Senate. Chuck Wiger has been a Minnesota State Senator since 1997 in District 43, which includes portions of Ramsey and Washington counties in the northeastern Twin Cities metro area. 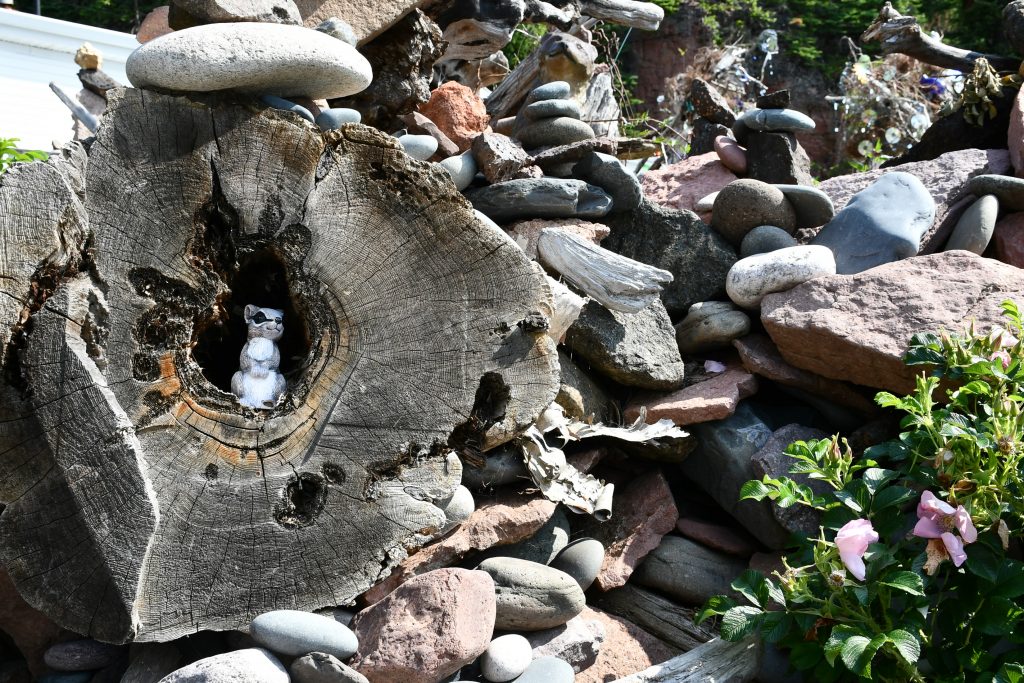 This DFLer has championed a number of important causes to improve the lives of Minnesotans.  Examples include ensuring every student has access to a high-quality education regardless of their zip code, keeping health care workers safe from violence, and empowering students in the fight against climate change.

So now the stories are settled! The work turned from function to fashion, and it continues to intrigue, bewilder, and inspire passers-by on Highway 61 near Hovland.

It has become a local landmark and roadside attraction. Cars are frequently stopped on the side of the road to look or take pictures. In fact, as Chuck and I were standing in the yard talking, someone that was outside of their car taking pictures asked us to move because we were in the way, lol!

Even if the looks aren’t your cup of tea, after learning the background and the message, hopefully, viewers can open their hearts and minds to the joy it is intended to deliver.

Please note, this is more of a drive-by-slowly type of attraction, as opposed to stopping and getting out of your car. There is no parking along the highway, and it is private property.

Devil Track River, Get In and Explore

19 thoughts on “Roadside Art With a Message in Hovland, MN”