Winter at Split Rock Lighthouse offers crowdless access to the lighthouse grounds, observation deck, and museum. On a winter tour of the North Shore, I recommend exploring this iconic Minnesota Historical Society attraction – no matter how cold it is!

While you’re here, be sure to venture into the adjacent Split Rock Lighthouse State Park to explore the sights and trails near Lake Superior. 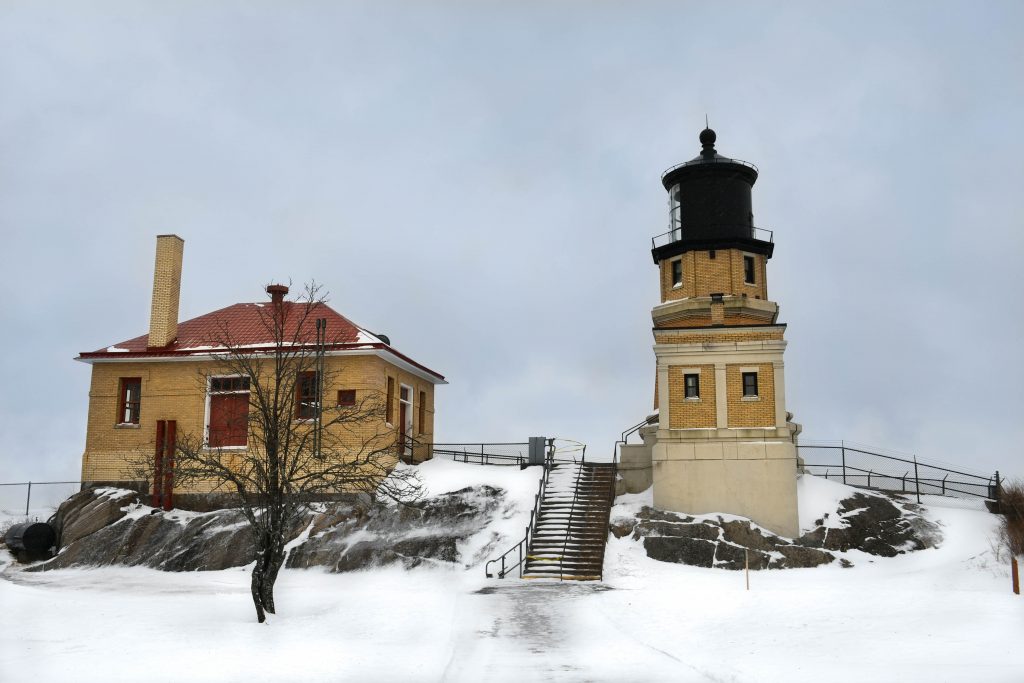 On my visit during a polar vortex, the temperature was hovering around zero. That’s just what you get during a North Shore winter! But I bundled up and didn’t let the weather stop me from taking in the unique winter scene at Minnesota Historical Society’s Split Rock Lighthouse! Here on the North Shore, we have a saying: there’s no bad weather, only bad gear. So come prepared to explore the outdoors!

You won’t be surprised that I was just about the only person outside (there were others, but not many). During a warmer winter day (above 20 degrees F.), Split Rock Lighthouse sees about 50 – 100 visitors, compared to over 2,000 per day during peak season. That’s a great reason to visit during the winter!

it is incredible to stand before the historic structures that date back to the early 1900’s (minus everybody else in your way). Take your time to explore the grounds, take pictures, experience the surreal solitude 130 feet above Lake Superior, and relish the view. The interior of the buildings are closed during the winter, and tours of the grounds are self-guided only. Admission is free from January 1 – February 28. 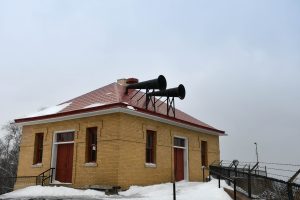 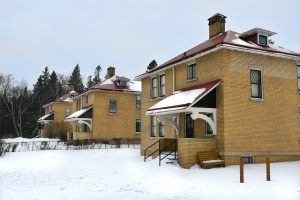 Speaking of the view, it is incredible! The observation deck sits at the foot of the lighthouse, which is atop a 130-foot cliff rising above Lake Superior. Karly Fransen, site operations supervisor for Split Rock Lighthouse said, “The winter season brings weather events and people love to travel here to see them. The lake will show off with sea smoke and ice forming in late winter. There are many photographers trying to get the perfect weather or non-weather picture. Then, of course, there is watching the surfers on the big waves! Winter is just so unique with all the different weather happenings.”

View of Ellingsen Island from the Observation Deck

When you want to warm up, come inside the Visitor Center and Museum Store. Meet the friendly and knowledgeable staff, and browse the locally made goods and art, a wide selection of books, souvenirs, North Shore apparel, outdoor gear, stuffed animals, and lots of other really cute things to buy. 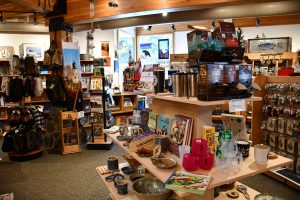 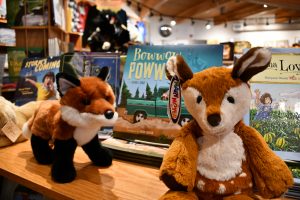 In the Museum Gallery, check out the replica of the hoist engine that was used to hoist supplies and equipment from Lake Superior to the top of the cliff (quite the feat in 1910!). You’ll love the model of Split Rock Lighthouse made with 20,000 LEGOs, which was created for the centennial in 2010. 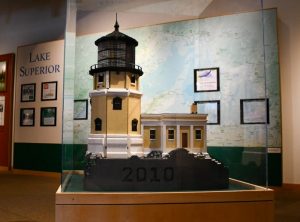 Split Rock Lighthouse made out of 20,000 Legos! 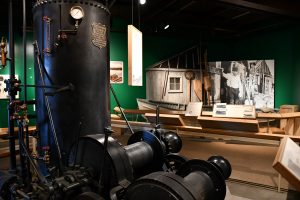 Winter is also a special time at the adjacent Split Rock Lighthouse State Park. The biggest attraction is hiking, snowshoeing, or fat tire biking along the 8-mile mixed-use trail. Even in the polar vortex, there were a few groups of people exploring the Lake Superior shore at Pebble Beach and snowshoeing on the trails around the park. 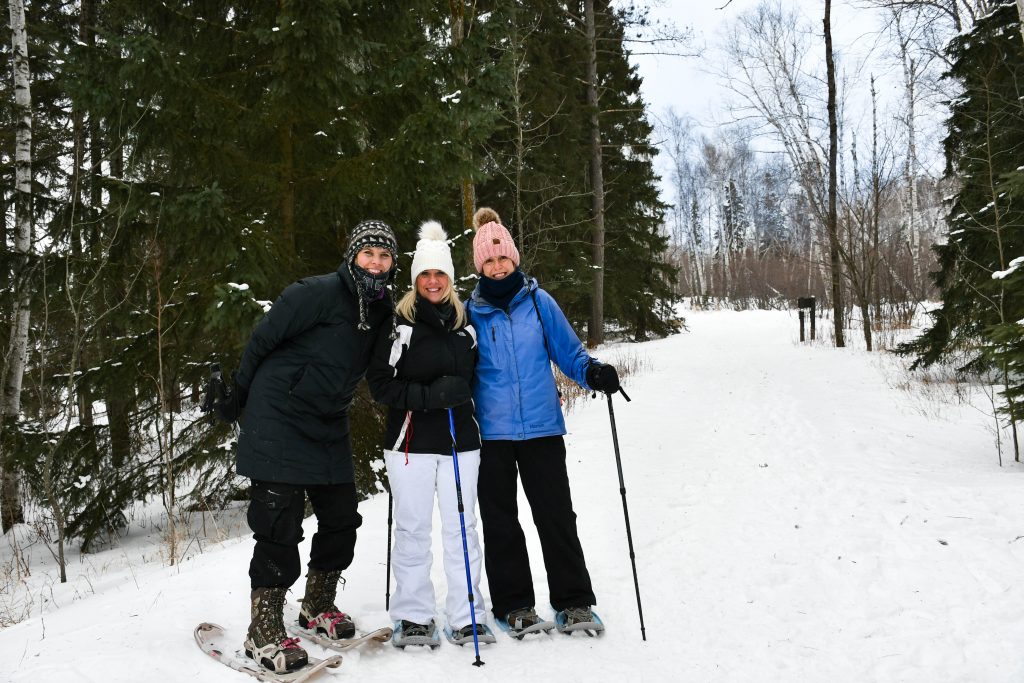 The multi-use winter trail starts at the Picnic Area and hugs the shore until you get past Ellingsen Island. Then it cuts north to Day Hill, pedals past Corundum Point, and curves around Crazy Bay. Just after Split Rock Point, it hooks up with the Gitchi Gami State Trail (unmaintained in the winter). There are lots of great things to see along this stretch! See the Split Rock Lighthouse State Park winter use map.

Former Park Manager, Luann Udenberg’s favorite snowshoe trail starts at the Lighthouse. “You start at the lighthouse and snowshoe the Lake Superior shoreline along the Little Two Harbors Trail. Go through the picnic area to Pebble Beach and head towards Ellingsen Island. That is where you can see that incredible view of the lighthouse on top of the cliff.” She also said that the Little Two Harbors Trail is the former home to a Norwegian fishing village circa 1910-1940-ish. Cool, huh?!

Please note that a Minnesota State Park Pass is required to enter the park.

Watching the sunrise behind Split Rock Lighthouse is one of the most amazing views on Lake Superior! Especially in the winter. 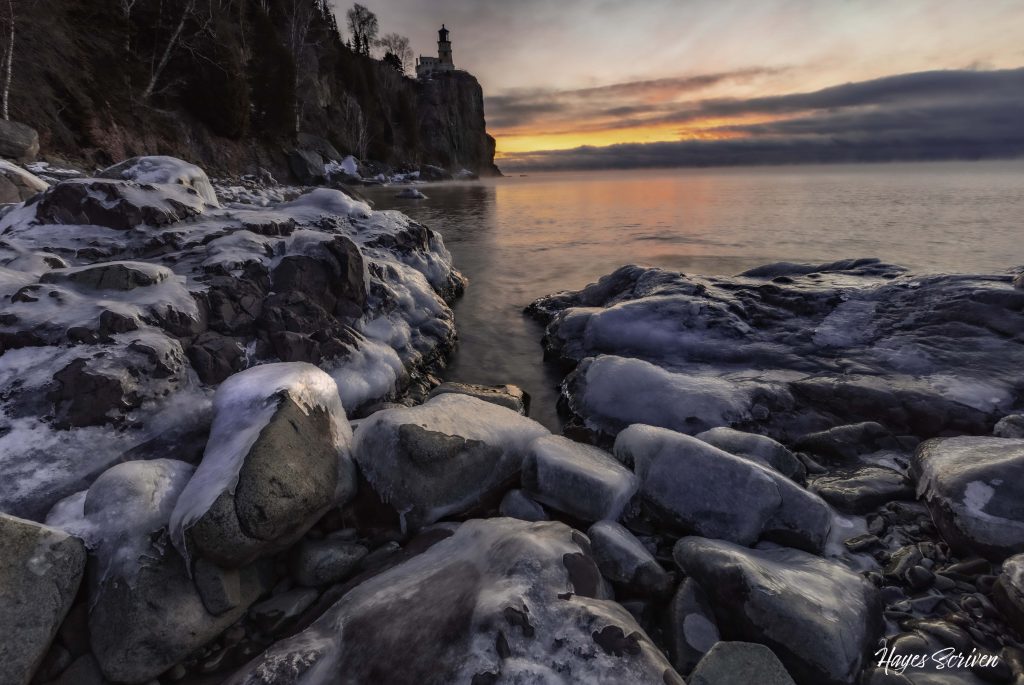 This is verified by Hayes Scriven, the Split Rock lighthouse keeper, site manager, and avid photographer. “Pebble Beach, inside the state park, is the best view of the sunrise on Lake Superior! The sun’s rays casting over the lighthouse are stunning. If that wasn’t enough, add the mysterious Lake Superior sea smoke, and an ice-covered shore…it’s amazing.”

On November 10, Split Rock Lighthouse lights her beacon to commemorate the sinking of the SS Edmund Fitzgerald, and all of the other vessels lost on the Great Lakes. At 4:30 pm, the lighthouse closes temporarily while the Naval Hymn is played and the names of the 29 lost crew members are read to the tolling of a ship’s bell. At the end of the ceremony, the beacon is lighted and visitors are welcome to tour the lantern room. This is the only time during the year that visitors are able to see the interior of the light tower while the beacon is lit. The beacon lighting ceremony attracts nearly 900 people each year. 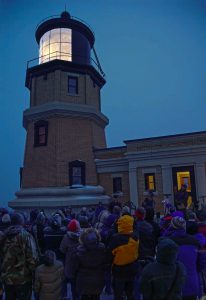 A Candlelight Ski & Snowshoe event is normally held at Split Rock Lighthouse State Park on the first Saturday in February.  Unfortunately, the event will not happen in 2022 due to Covid restrictions. But I definitely recommend putting this event on your winter bucket list in the future! 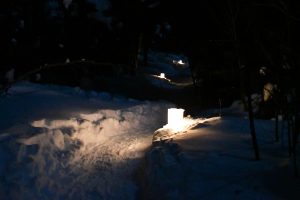 The Minnesota Historical Society Split Rock Lighthouse Visitor’s Center, Museum Store, and outdoor grounds are open Thursday through Monday 10 a.m. to 4 p.m. (closed Tuesday and Wednesday). The lighthouse and historic building interiors are closed in the winter. Admission is free.

The Minnesota Historical Society Split Rock Lighthouse Visitor’s Center, Museum Store, and outdoor grounds are open Thursday through Monday 10 a.m. to 4 p.m. (closed Tuesday and Wednesday). The lighthouse and historic building interiors are closed in the winter. Admission is free.

Split Rock Lighthouse is open daily from 10 a.m. – 4 p.m. The visitor center, fog signal building, and historic grounds are open to visitors with a grounds pass. Access to the lighthouse and keeper’s house are only available on the Keeper’s Tour.

Split Rock Lighthouse is open daily from 10 a.m. – 4 p.m. Tickets for the Grounds Pass, and the Keepers Tour are available.

How to Get There

Split Rock Lighthouse is located at mile marker 46 along  Highway 61. It is between Castle Danger and Beaver Bay.