Things to do in Two Harbors, MN

Things to do in Two Harbors, MN 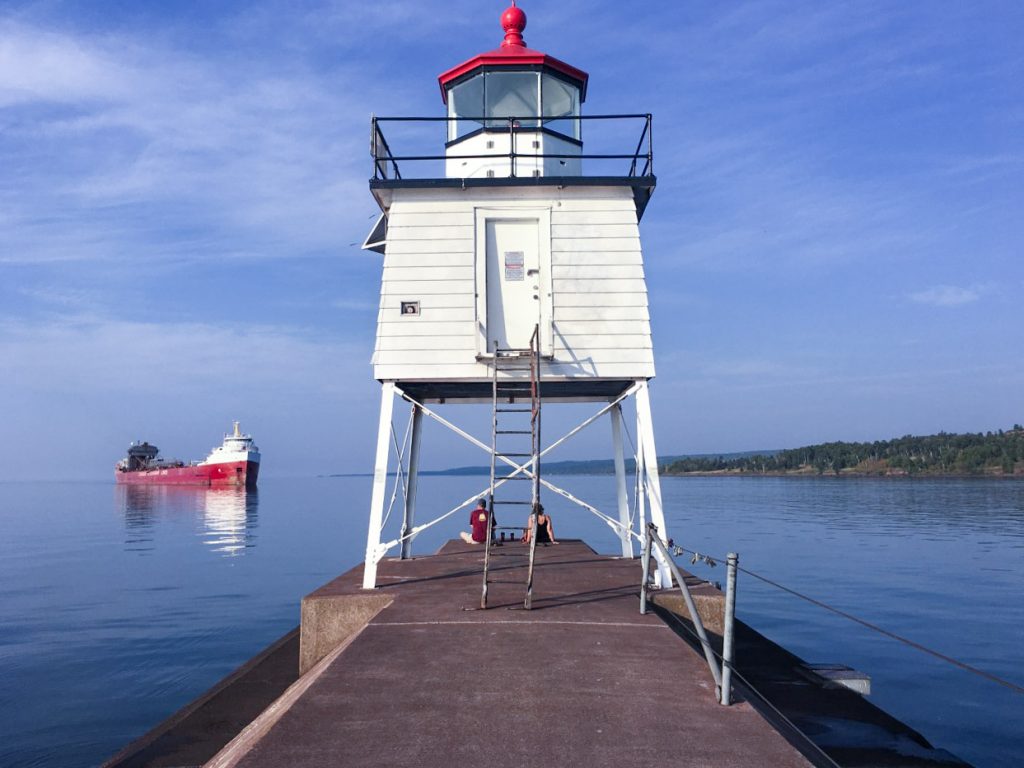 Take the concrete path of the breakwater for a nice long walk out into Lake Superior. You will be completely surrounded by The Big Lake on this little adventure! There’s really nothing like it.

What’s more, you have a good chance of encountering one of the enormous iron ore tankers that come into the harbor to fill up. They are picking up iron ore that was freshly mined from Minnesota’s Iron Range, located about 70 miles west of Two Harbors. The ships travel right past the breakwater and the light station to get to the ore docks. Get close and watch them maneuver around the harbor. It’s incredible! 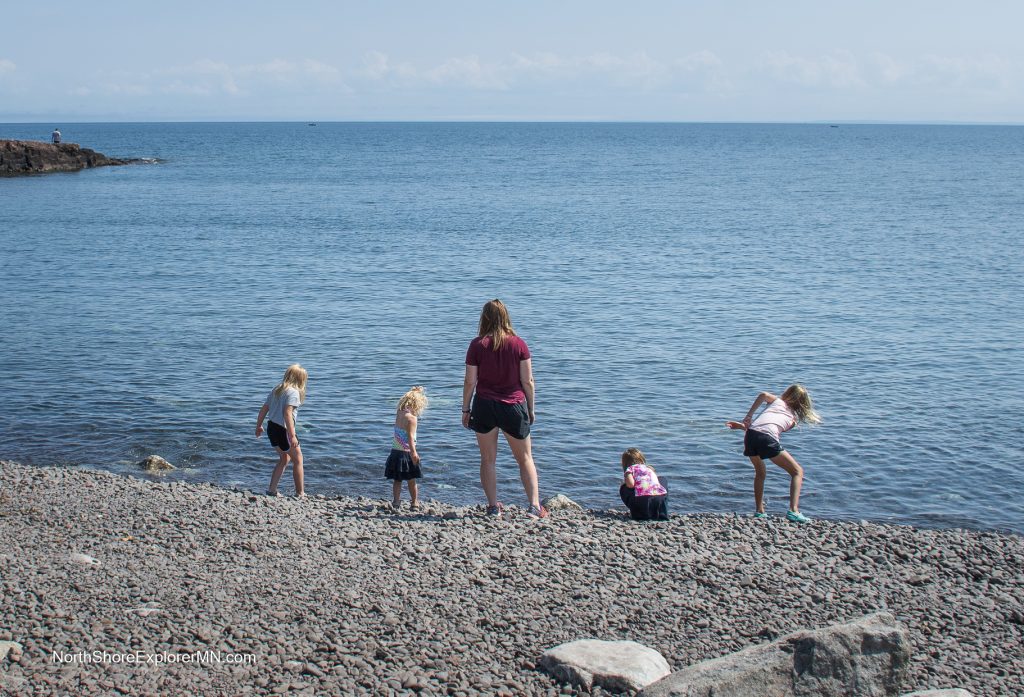 Next to the entrance to the breakwater is a small beach perfect for rock skipping – Agate Bay Beach. There are picnic tables, park benches, and a path around the waterfront. All of this provides wonderful viewing of Lake Superior and the ore docks.

There is also a large, protected public access with a boat launch and a couple of docks. 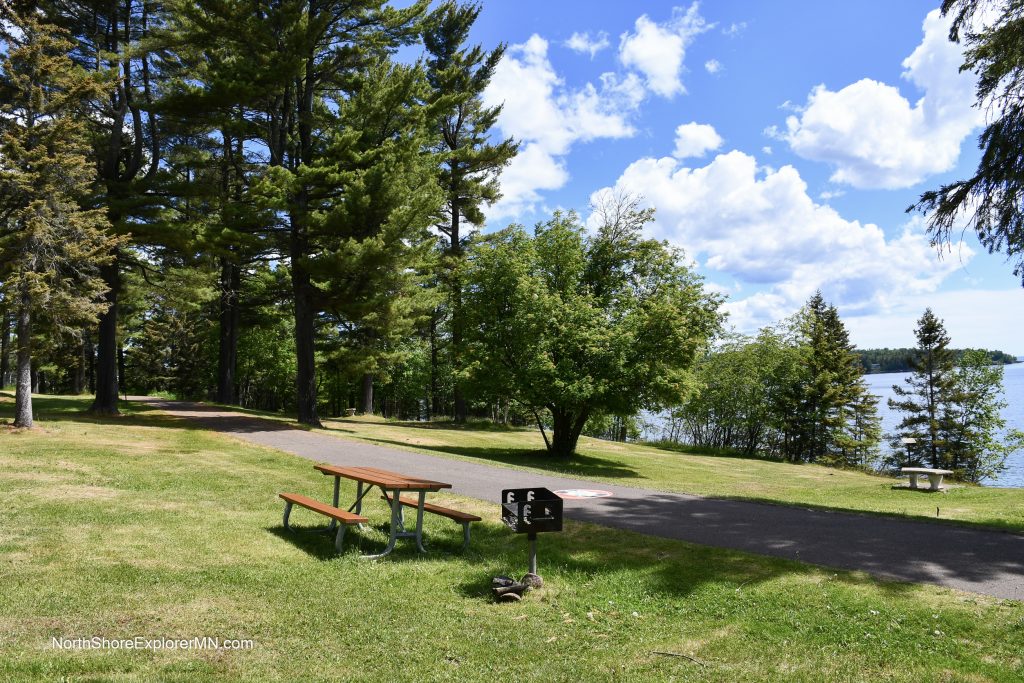 Walking or biking the Sonju Trail next to Lake Superior is another great thing to do in Two Harbors. The trail goes from Agate Bay to Burlington Bay to make a scenic tour of the Lake Superior Shore. The partially paved trail is only about a mile. It takes you past the beautiful shoreline and wooded areas with tall pine. Make a stop along the way to get close to Lake Superior and admire her majestic beauty.

The Sonju Trail also takes you through Lake View Park where there are picnic tables, barbeque grills, park benches, and open grassy areas to enjoy. It is not uncommon to see wildlife! Check it out in my blog post 10 Beautiful Picnic Areas on the North Shore.

To access the Sonju Trail, park at Agate Bay or Burlington Bay. 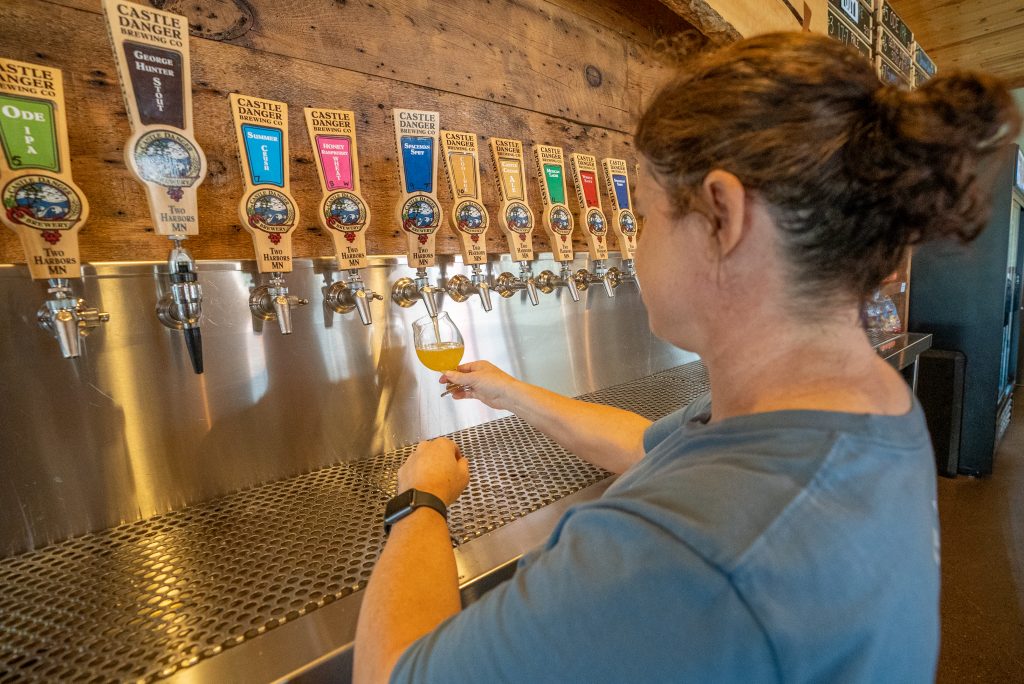 Small businesses are what makes the heartbeat in Two Harbors, MN! You will find some of the most unique and interesting shops with home and outdoor gear, local arts and crafts, curated collections of gifts, local craft beer, and more.

If you’re looking for something fun to do in Two Harbors, don’t miss Castle Danger Brewery. This popular craft brewery supplies beer across the Midwest and beyond, and is among one of the most popular Minnesota craft brews. They have a rotating selection of 13 fresh-brewed beers on tap, an inviting taproom, an outdoor deck, and a lawn with backyard games like cornhole. 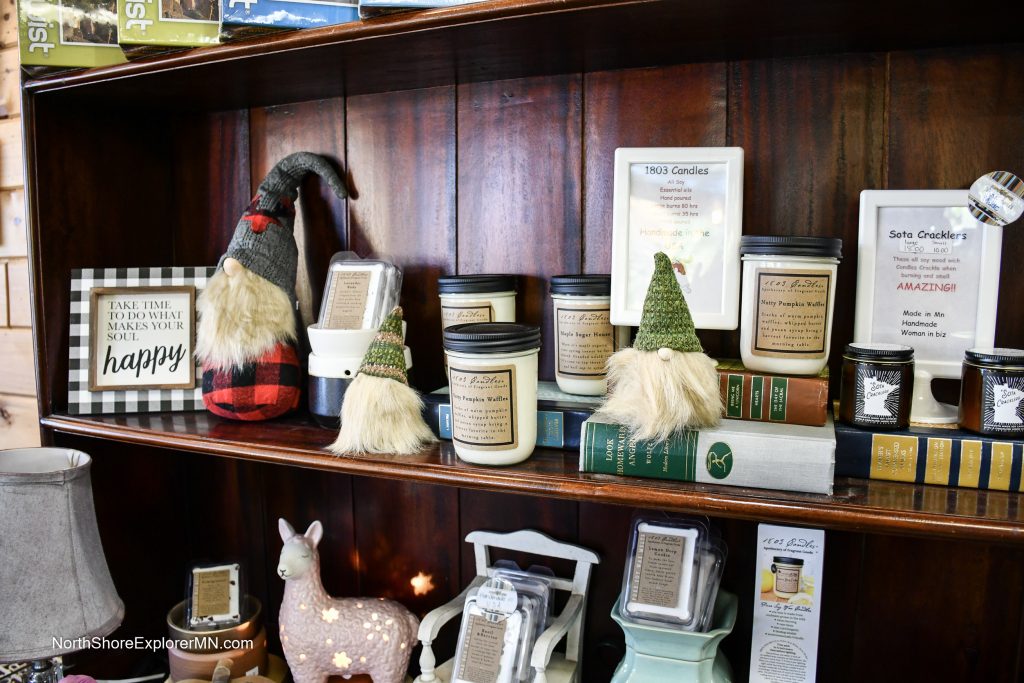 Great shopping is available all around the downtown area. First, stroll along the main street on Highway 61. You’ll find places like Moosecellaneous Gifts, The Bee’s Knees, Dairy Queen and many others. Then, head into town towards the waterfront to explore the side streets and the area around 1st Avenue.

On the northeast side of town, be sure to add Burlington Station and Lou’s Fish House to your list of things to do in Two Harbors. Burlington Station and Callie’s Sweets is a new attraction in Two Harbors, having opened in summer 2021. The large building is chock-full of homemade chocolates, candies, and popcorn, and gifts. Coming soon is the installation of an elaborate train display. 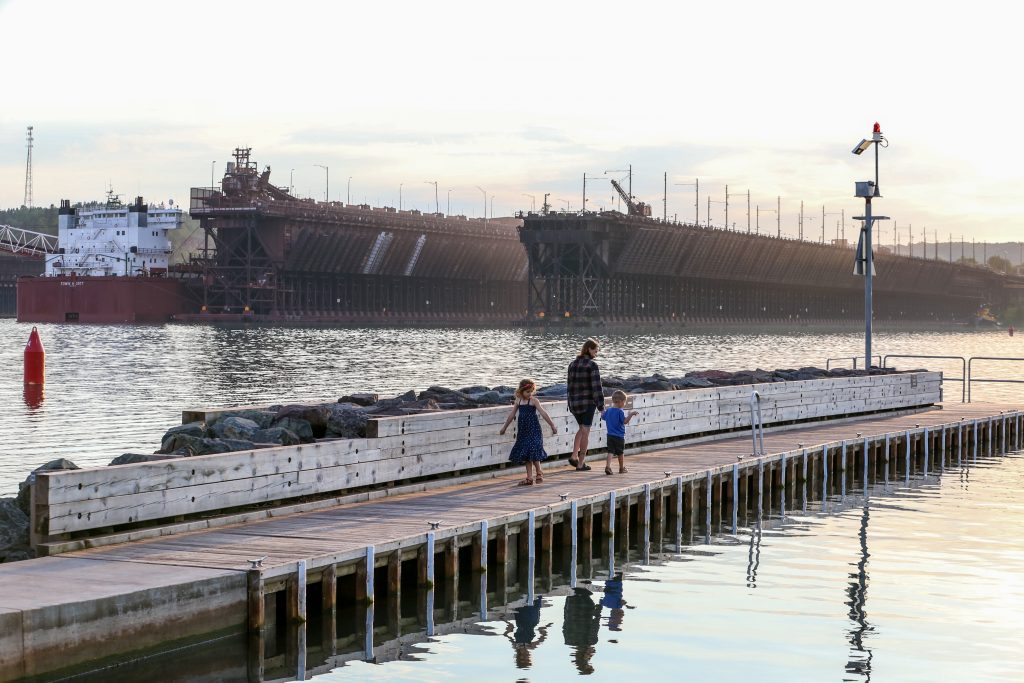 As we’re talking about things to do in Two Harbors, MN, don’t let the beauty blindside you from the history! Great historical attractions abound in Two Harbors.

Iron ore was central to the foundation of the city of Two Harbors dating back to 1884. Minnesota’s Iron Range, located just west of Two Harbors, has one of the largest iron deposits in the world. This led to the development of the ore docks, which were Lake Superior’s first ore docks, and the largest in the world. By 1885 over 225,000 tons of iron ore were being shipped out of Agate Bay. It led to the development of the railroad, lighthouse, light station, and breakwater. 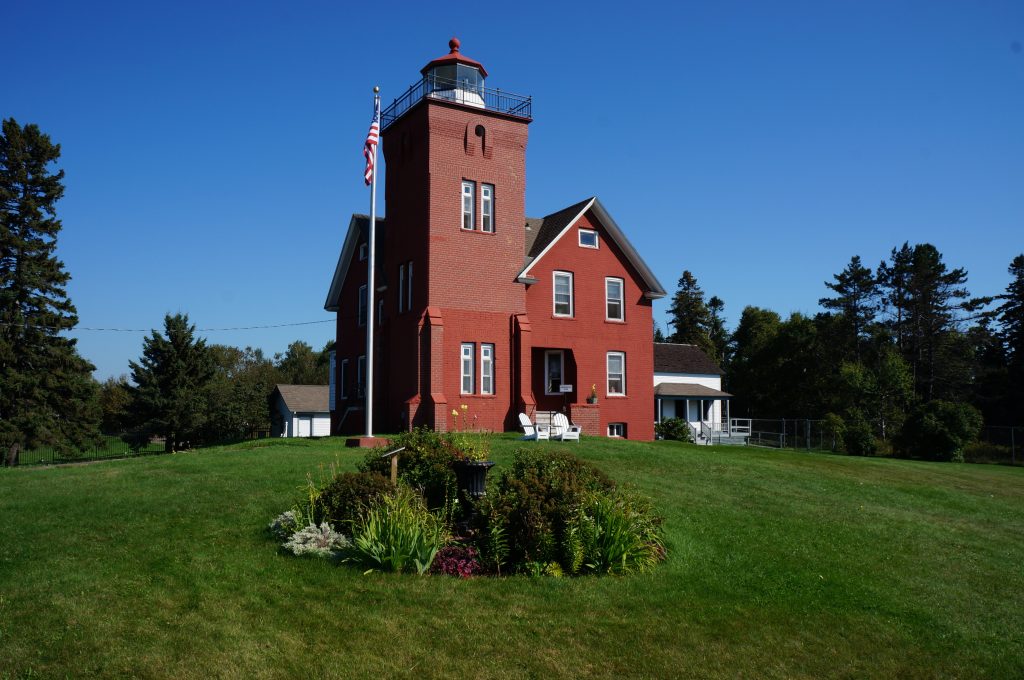 There are two lighthouses in Two Harbors. The lightstation at the end of the breakwater in Agate Bay is the main one that comes to mind. The other is the original lighthouse located on the land between Agate and Burlington Bays. First lit in 1892, it is the oldest, still operating lighthouse in Minnesota. It’s also known as the Two Harbors Lighthouse Museum and the Lighthouse B&B.

At the Lighthouse Museum, take a self-guided tour through the working end of the lighthouse. Walk up to the top and see exhibits in the Cleaning and Wicking Room and Watch Room. There are great views on the way up through the portholes in the Watch Room. 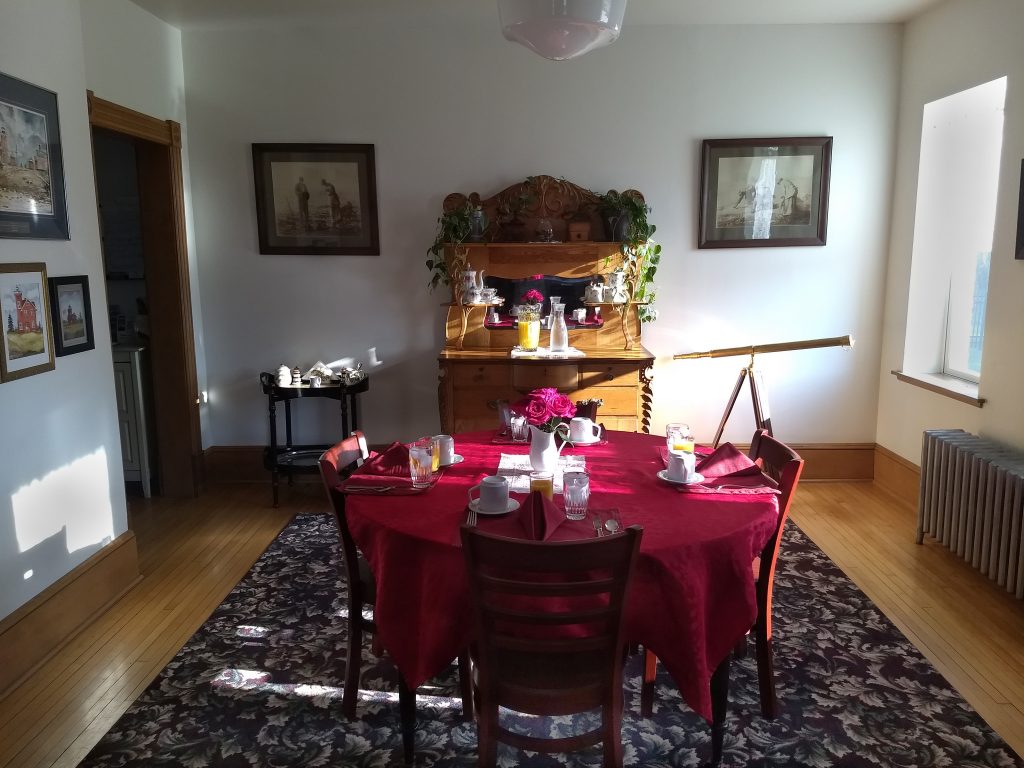 Enjoy breakfast at the Lighthouse B&B

Have an authentic experience by staying at the historic lighthouse! The living quarters were converted to a bed and breakfast in 1999, called the Lighthouse B&B.  Cozy up in the Keeper’s Room or the Skiff House. Enjoy breakfast amidst the original Fourth-Order Fresnel Lens that’s on display in the Dining Room. Scandinavian fruit soup, anyone? It’s their signature dish, served as an appetizer before the hearty, homemade breakfast main course. 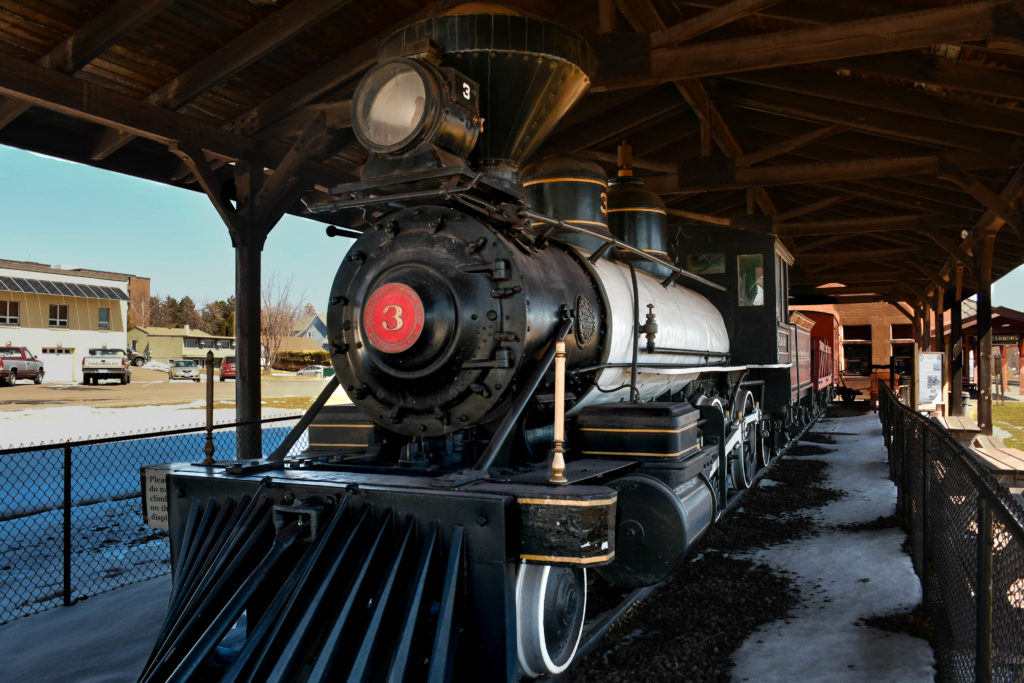 The Two Harbors Depot Museum used to be the 1907 headquarters of the Duluth & Iron Range Railroad. Today the museum features exhibits highlighting the three industries that built Two Harbors, and Lake County, Minnesota: iron mining and the supporting railroad, commercial fishing, and logging.

Taking the train to the Depot Museum is such a fun thing to do in Two Harbors! The North Shore Scenic Railroad offers day trips from the Duluth Depot Museum to the historic station in Two Harbors, MN (board the train in Duluth). The scenic ride takes you along the lake with a stop in Two Harbors for some local exploration. The round-trip is a full-day excursion running weekends in the summer and fall. Check out the details here.

You don’t normally associate 3M with Two Harbors, Minnesota, but here is where it all began in 1902! The quaint 3M Museum in Two Harbors is located in the original building that housed the law office of John Dwan, one of the original owners. The small building is chock-full of interpretative exhibits and artifacts logging the early days on up. 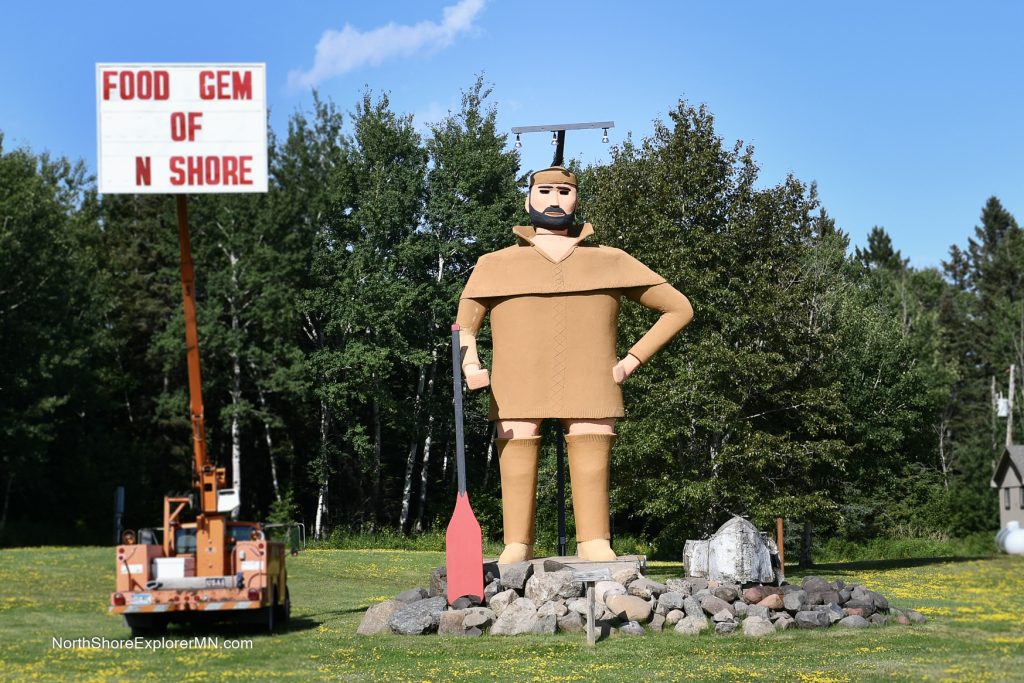 Pierre the Pantless Voyageur will greet you on your way to Two Harbors from Duluth! He stands 20 feet tall on the lawn of the Earthwood Inn, with a paddle in hand, and no pants.

Pierre has been welcoming visitors to Two Harbors since 1960. His original location was at the Voyageur Motel as an attraction of Nelson’s Voyageur Museum which was located next to the motel. In his heyday, Pierre’s head moved and he could even talk thanks to a motel employee in a nearby hidden booth. He has a long history of hospitality!

In 2011, after years of disrepair, he was adopted by the folks at the Earthwood Inn. Since then, he has been well cared for, so he can greet you on your way up the North Shore. Stop for a photo!

There are a few very nice places to stay in Two Harbors, MN. These are listed from southwest to northeast (in order as you drive from Duluth).

AmericInn by Wyndham, Two Harbors is located on the west end of town, near Super America. They have a pool and a complimentary hot breakfast.

The Country Inn of Two Harbors is a newly renovated hotel, conveniently located in the Highway 61 business district (near McDonalds). It has a mini-golf course and offers a complimentary hot breakfast with Belgian waffles.

The Voyageur Motel is located right on Highway 61. Its welcoming host will check you into the comfortable motel.

The Superior Gateway Lodge is a luxurious vacation rental outside of town. It has three suites for up to six guests and a spacious living room with an indoor/outdoor fireplace.